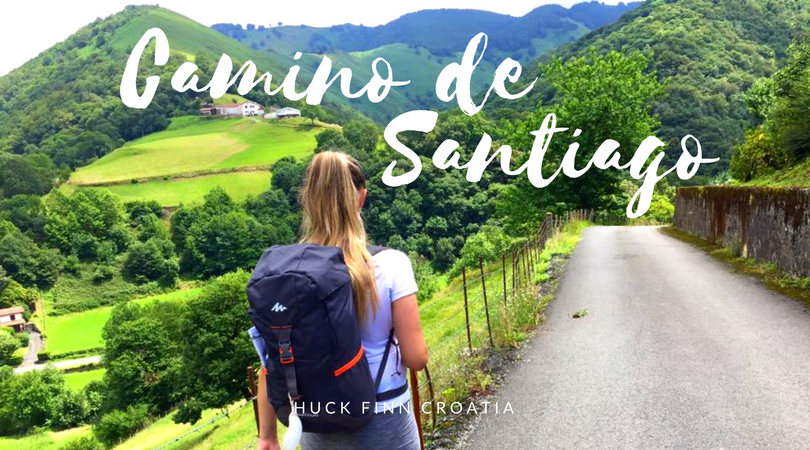 My journey started in summer of 2016. Around April that year my mum told me about this famous pilgrimage and how people walk across Spain for one entire month, approximately 30 kilometers per day to reach Santiago. I didn’t really think about it that much at the time – the only thought I remember having is that people have crazy ideas, and this one was definitely one of those. I mean walking and walking for hours, what’s the point?

As it happened, the following week I watched the movie “The way” and as cheesy as it was, I feel in love. During the following month my mum and I decided that we would go. We did our research (ok, mum did the research), bought gear (fast drying clothes, backpacks, sleeping bags, small towels, water bottles, plasters, medicine…) and plane tickets.

On July 22nd we landed in Barcelona, took the bus to Pamplona and stayed there overnight. The following morning we were on our way to Saint-Jean-Pied-de-Port, a charming small town in France where the original route starts. Before you start walking, you need to get your Camino passport so we went into the starting point office, talked with the locals surrounded with people from around the world waiting in line to start their journeys as well. When we finally got our empty passports we took our first step towards the Pyrenees Mountains. That day we were practically alone on the route and had about 25km through the woods to get to our very first Albergue (hostels for pilgrims only) that was in small village named Roncesvalles. The beds were old and squeaky and the guy that came here all the way from Mexico was snoring as loud as farm tractor, but we were so tired that we fell asleep immediately. Next morning we woke up around 6 am and continued our way. The sign in front of us said ‘’790km left’’. Huh.

As we continued walking for days, following that yellow arrow pointing us in the right directions, we met a lot of unusual, interesting and mysterious people to say the least. There was that older Russian lady writing a novel about her life while being drunk most of the days. A priest named Thomas from Chicago that was into ‘’Breaking Bad’’ series. Tina from London that wanted to start her life over in Australia but wasn’t confident in her decision. A weird guy from Estonia who had so many blisters, I don’t even know how he walked. Eric from Ireland with his two sons (we even celebrated one of his son’s 13th birthday). One tiny guy from France that wanted to be a biology teacher and when we saw him again 3 weeks later he was at least 20 pounds lighter due to food poisoning. A man from Norway who started walking from Oslo (!!) and was walking for months already at that time… 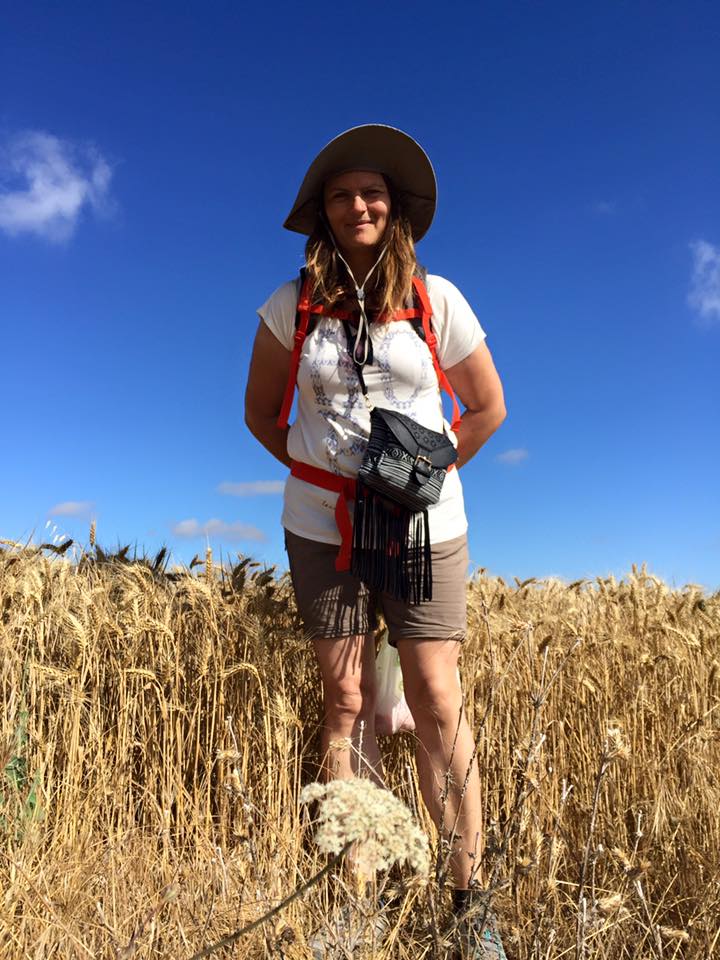 On the 7th day my crisis started. It was steaming hot, the road seemed never ending and there was no sight of trees or any kind of shelter, only burning sun. For two days I was walking like zombie, crying like a brat, blaming my mum and the whole wide world for being here. If there had been a bus, believe me, I’d have been on it and on my way home. Thank God there wasn’t.

One night we slept in old monastery where the local nuns cooked for us. After dinner, all 50 of us had to hold hands and sing Spanish religious songs. That was one of the most awkward and most beautiful nights of my life.

We witnessed a boy being stabbed in his back by a bull during cruel, traditional bull fights in Puente de la Reina. Young boys would jump in the ring and run in front of furious bulls between real toreador shows. And for the next few days whenever even cows got close to us we’d get a slight heart attack. 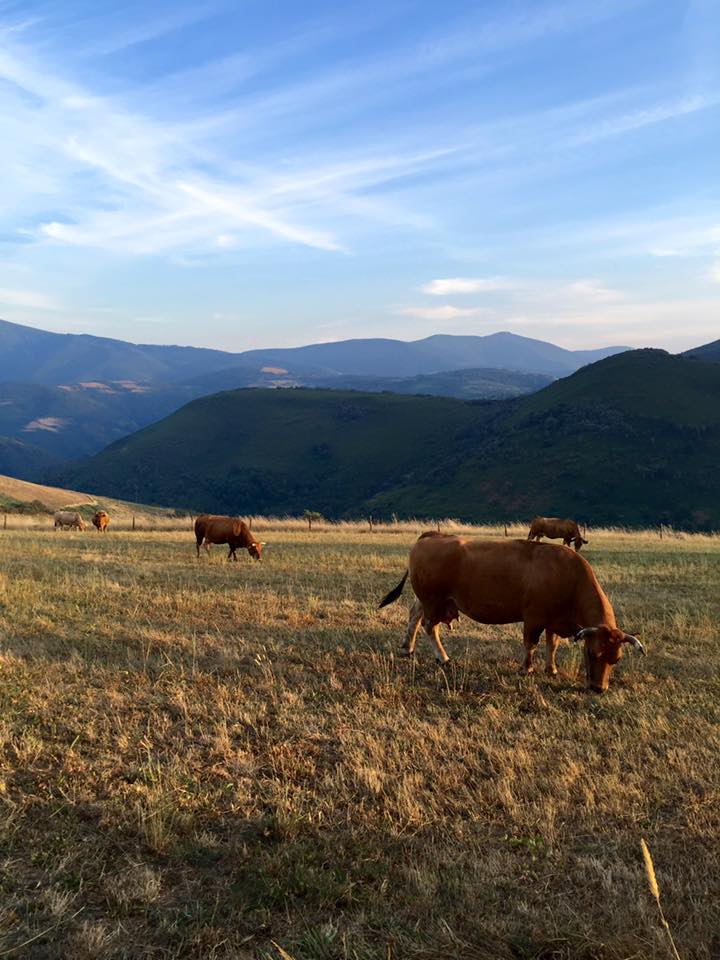 One evening we came so late to our albergue that the reception lady didn’t want to let us in, even though we tried to explain that the next village is 12 kilometers away, it’s 10 pm, we are really sweaty and it started to be seriously cold. We needed a warm shower and bed more than anything and that night this was not a possibility. Visibly upset we talked with some other pilgrims, waited for that lady to fall asleep and then they sneaked us in through the back door. We took a shower and finally fell asleep on the cold laundry room floor. I am still grateful to these strangers because without them, it would have been a long, cold night for us.

The food we ate through our pilgrimage was mostly watermelons or peaches for breakfast and local bread throughout the day. Usually around 4,5 pm when we would arrive in our albergue we’d cook something quick like pasta with veggies or share dinners with others. We felt great!

The nature was just something else. From giant sunflower fields, colorful hills full of cows and sheep, old villages with only a few locals, half broken wooden bridges, wheat fields that looked like endless fields of gold to rainy and dark greens of Galicia. 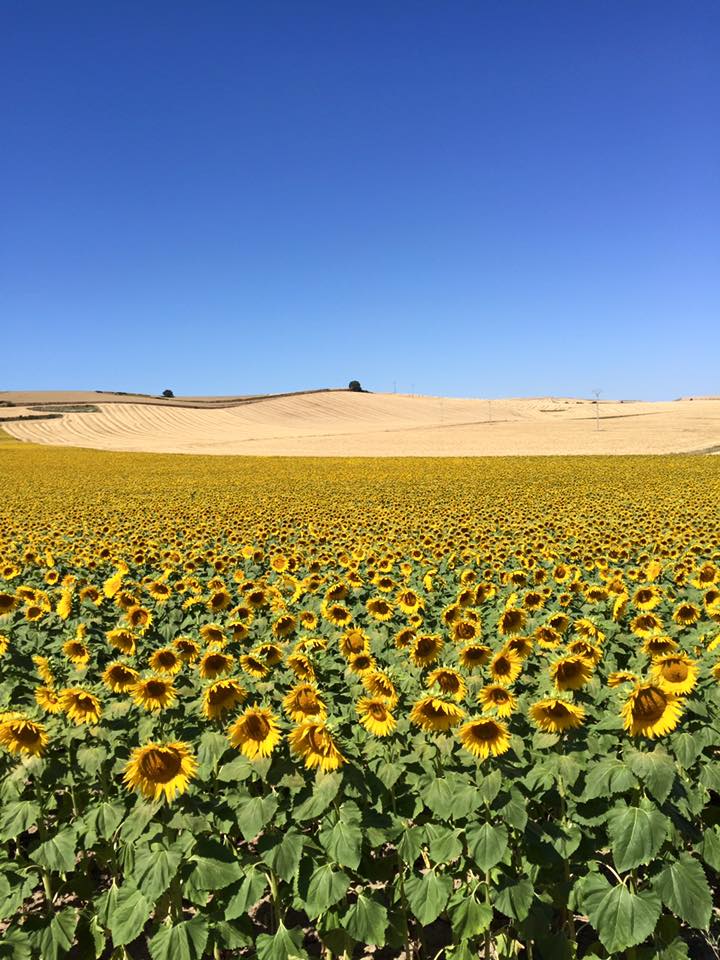 As we were getting closer to the province of Galicia, days started to get a bit cooler and therefore more bearable to endure. We’d wake up even earlier, around 5am when there was still dark outside, feeling so fresh that even our backpacks seemed way lighter. Clean air, nature, local fruits and miles of walking were doing us good.

The final few days started to become a bit more crowded; more touristy, because if you wanted your Camino de Santiago certificate, you needed to walk for at least 100 kilometers. But I don’t really see the point in doing that, if you are going to go, then go all the way. Start where the original route started, where people walked for hundreds of years for their personal, usually religious reasons. 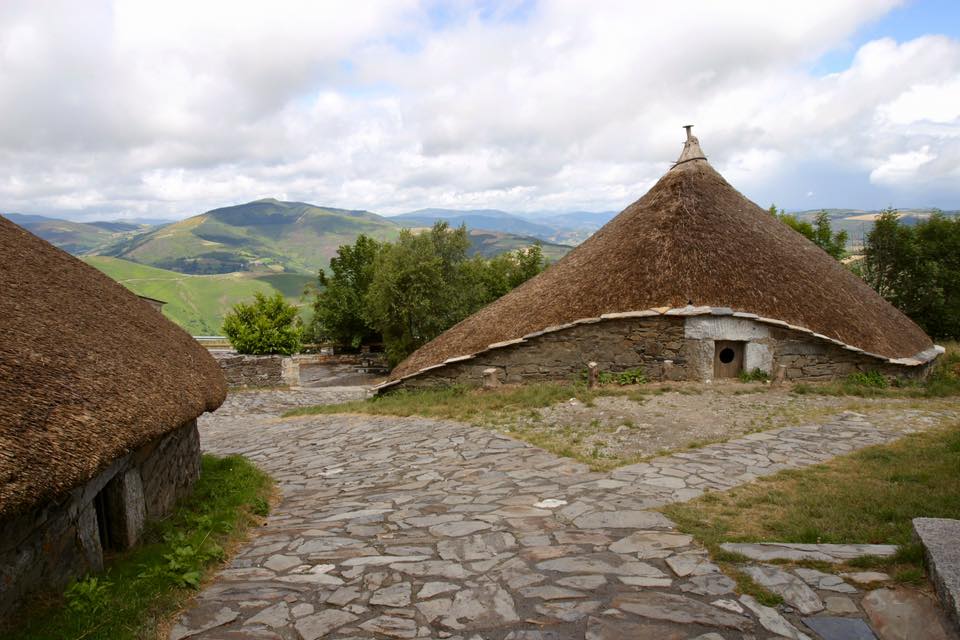 In the morning of our last day I remember the feeling of confusion, sadness and extreme happiness. By that time we knew almost everyone on the road and everything seemed familiar. Unknown places became home and walking for days seemed absolutely normal. When we entered the huge city of Santiago we had about an hour left to get to the center with Santiago de Compostela cathedral in the middle of square.

Getting right in front of the cathedral is where our journey ended. I remember having lump in my throat and overwhelming feeling. I can’t believe it’s over. I also cannot believe we walked for 840 kilometers! How did that happen? I was so damn proud and so was my mum.

We went to find our very last albergue to sleep over and in the early morning catch the long bus ride towards Barcelona. We spent our last day walking around the city, dining and photographing every single corner.
They say that one day of Camino is like a whole month in regular life and I couldn’t agree more. With passports full of stamps we went back to Croatia.

Lea Androić
Lea has a degree in Finance, but her real passion is traveling. At the age of 18 she packed her bags and moved all the way to San Francisco. Since then, she has also lived in Canada before finally returning back to Croatia. Travelling became huge part in her life and her latest accomplishment was walking Camino de Santiago trail in Spain. After discovering her love and interest for social media, photography and blogging, she decided to combine her passions and is now in charge of our blog and social media. When not working or traveling, Lea enjoys vegan baking and editing videos for Youtube.
Previous post5 ways to be a more sustainable traveler
Next postTypical Croatian souvenirs 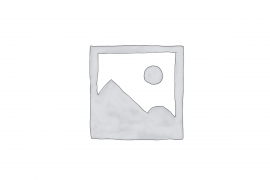 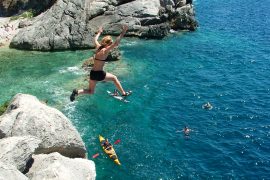 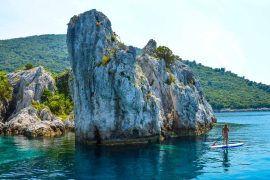 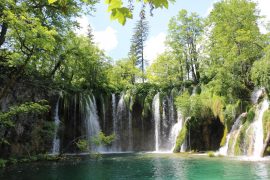